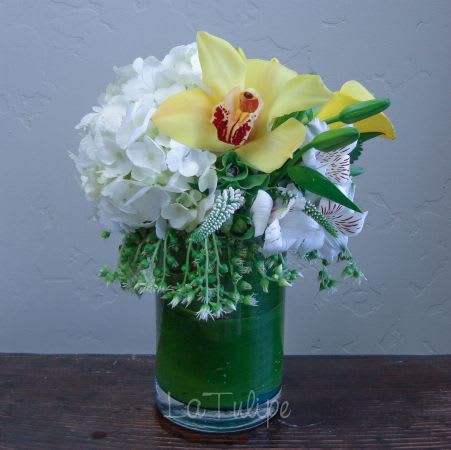 Send fresh flowers to Fayetteville, AR. Same day flower deliveries available to Fayetteville, Arkansas. La Tulipe flowers is family owned and operated for over 24 years. We offer our beautiful flower designs that are all hand-arranged and hand-delivered to Fayetteville, Arkansas. Our network of local florists will arrange and hand deliver one of our finest flower arrangements backed by service that is friendly and prompt to just about anywhere in Fayetteville, AR. Just place your order online and we’ll do all the work for you. We make it easy for you to send beautiful flowers and plants online from your desktop, tablet, or phone to almost any location nationwide.

Fayetteville is the second-largest city in Arkansas, the county seat of Washington County, and the biggest city in Northwest Arkansas. The city is on the outskirts of the Boston Mountains, deep within the Ozarks. Known as Washington until 1829, the city was named after Fayetteville, Tennessee, from which many of the settlers had come. It was incorporated on November 3, 1836, and was rechartered in 1867. The three-county Northwest Arkansas Metropolitan Statistical Area is ranked 105th in terms of population in the United States with 546,725 in 2020 according to the United States Census Bureau. The city had a population of 93,949 at the 2020 Census.

Fayetteville is home to the University of Arkansas, the state’s flagship university. When classes are in session, thousands of students on campus change up the pace of the city. Thousands of Arkansas Razorbacks alumni and fans travel to Fayetteville to attend football, basketball, and baseball games. The city of Fayetteville is colloquially known as the “Track Capital of the World” due to the success and prestige of the University of Arkansas cross country and track & field programs. The University’s men’s cross country and track and field programs have won a combined 41 national championships to date with the women’s teams adding 5 national championships since 2015.

The city is the first in America to be awarded the designation of “Bike City” by the Union Cycliste Internationale (UCI), the world governing body of cycling. It was given the title in 2021 due to it not only hosting major UCI cycling events, but also its work in developing cycling through programs and infrastructure.

Fayetteville was named the fourth best place to live in the United States in the 2021 U.S. News Best Places To Live Rankings, and one of the best places to retire in the South. Forbes also ranked Fayetteville as the 40th-best city for business and careers in 2021. Lonely Planet named Fayetteville among its top 20 places to visit in the South in 2016. The city hosts the Walmart Shareholders Meetings each year at the Bud Walton Arena.